Prof. Dr Rudolf von Sinner during the public lecture at the Ecumenical Center, in Geneva. Photo: I. Haaz/Globethics.net
Rev. Prof. Dr Rudolf von Sinner, professor of Systematic Theology, Ecumenism and Interreligious Dialogue, as well as moderator of the World Council of Churches (WCC) Ecumenical Education and Formation Commission, delivered a public lecture in Geneva on 13 April 2018.
The topic of the lecture was ‘current trends and challenges in ecumenism and theological education in today's world'. The lecture was part of the WCC's ongoing observance of its 70th anniversary this year and was organised by Globethics.net on the occasion of the meeting of the governing body of the Global Digital Library on Theology and Ecumenism, GlobeTheoLib, a joint project of the WCC and Globethics.net.
The lecture, entitled ‘Theological Education in the Context of Global Christianity', reflected on both the advances and the setbacks that theological education is facing around the world. Prof. von Sinner provided a panoramic analysis of theological education in the context of the growing diversity of Christianity. During a post-lecture discussion, panelists offered reflections and proposals on what is needed for a sustainable ecumenical and contextual theological education today.
‘Ecumenical theological education is the task of churches situated in a specific context', said Sinner. ‘The context is part of theological reflection and not only the field of its application.'
In his lecture, Sinner clarifies some of the most common definitions and notions of ecumenism in Church history and, drawing on the ‘ecumenical principles' expressed in the Bible in the unity of Creation, and ultimately, the Trinitarian unity of God, Sinner argues for an ecumenism that cares equally about the unity and the respect of diversity, quoting two contemporary Latin-American ecumenists, Nicolas Panotto and Magali do Nascimento Cunha.
Situating theological education in its conflictual relationship towards the state and the church, Sinner concludes, that by serving/responding to the two ‘masters' (both the State and the Church), theological education may best achieve and fulfil its mission, e.g. gain freedom of research, ensure a high standard of teaching, defend its presence in the public sphere, and prevent withdrawal into confessional camps, although this ‘rather sophisticated theological education is expensive'.
‘A most interesting development is the seeking of theological education by sectors and churches that did not have a tradition of such, rather, that shunned theological education altogether beyond what was deemed immediately necessary for the life of the church', noted Sinner.
WCC general secretary Rev. Dr Olav Fykse Tveit welcomed the speakers and audience to the Ecumenical Centre, stating: ‘This is a great opportunity to discuss more about the future of theological education and how can this serve the common tasks that the WCC and Globethics are working on, especially in the field of church unity'.
Prof. Dr Obiora Ike, Executive Director of Globethics.net, said: ‘We are discussing today global theological education and the way forward, and we do know that theology may be in a crisis, may have opportunities, may have chances but we have to accept that the world in which we live now has potential as well and that is reflected in every possible way in the work of Prof. Dr Rudolf von Sinner, as the belief in the goodness of humanity.'
Strong confessional identities will only strengthen ecumenism, noted Rev. Dr Chad Rimmer, study secretary for Lutheran Theology and Practice at the Lutheran World Federation. ‘The lack of confessional identity is also a threat to ecumenism, since in order to build a bridge one has to have strong foundations and nowhere is this is more true than in public dialogue or in the engagement in the public sphere.'
Prof. Dr Amele Ekue, Professor of Social Ethics at the Bossey Ecumenical Institute, said: ‘Theological education is not merely inward and institutionally oriented, but more so has a function in societies, both symbolic and real: theological education contributes to reveal normative conflicts in societies and to develop viable avenues for their mediation, and it stands for the signs and visions every society needs to develop.'
Dr H.S. Wilson, Executive Director of the Foundation for Theological Education in the South East Asia, said: ‘One of the biggest challenges of ecumenical education is incorporating and contributing to a large conception change and paradigm shift in humanities and sciences in general.' 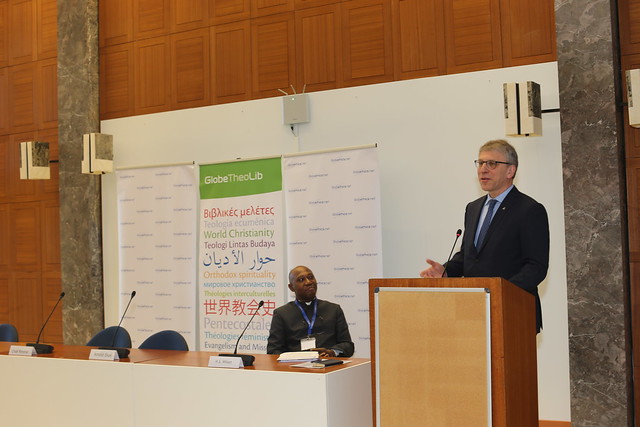