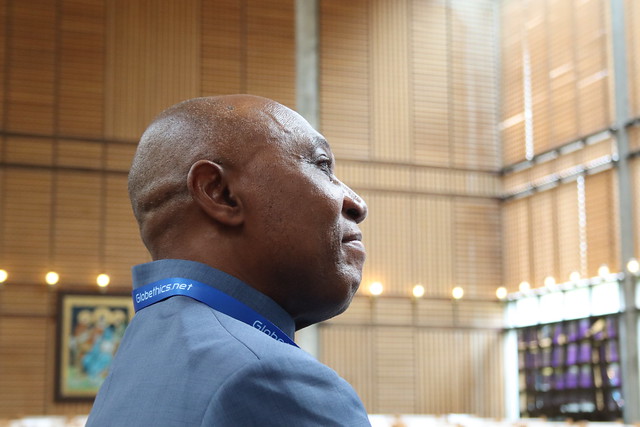 Globethics.net Executive Director, Nigerian priest and human rights activist Obiora Francis Ike has received this year's Stephanus Prize for persecuted Christians on 3 July in Geneva at the headquarters of the World Council of Churches. This is the yearly award of the Stephanus Foundation for Persecuted Christians seated in Frankfurt (Germany). Due to the COVID-19 pandemic, the presentation of the award took place in camera.

From 1998 to 2009 Obiora Ike was Vicar General of the Catholic Diocese of Enugu in southern Nigeria. "Professor Ike is a bridge-builder between Europe and Africa, Muslims and Christians, and between the present and the future. We honour him because, despite the danger to his life, he unwaveringly and diligently stood by his commitment, especially to the young people of his homeland. We pay tribute to his convincing efforts for more peace and hope", the Foundation's Board of Directors explains.

Obiora Ike has founded more than 20 non-governmental organizations. Among them is the Catholic Institute for Development, Justice and Peace (CIDJAP), which has been running a sponsorship program for education since 1987 and is also supported by German and Austrian donors. Ike, who speaks fluent German, studied in Innsbruck and was also ordained a priest in Austria in 1981. In 1985 he received his doctorate from the University of Bonn (Germany) with a thesis on the topic of Catholic social teaching and its significance for Africa.

"Education gives a child a key to the future," he says. With his program, Ike, born in 1956 in northern Nigeria, is doing exactly what the Islamist terrorist militia Boko Haram is fighting. The name of Boko Haram means no education, no western values, no civilization. For many years these terrorists have been burning down schools, churches and mosques. They fight the Muslims who do not share their world view and persecute the Christians, for whom Northern Nigeria has soon become one of the most dangerous places in the world.

Meanwhile, there is a high level of insecurity throughout Nigeria. Christians accuse their government of reacting far too meagerly to the bloody challenge. They have already demonstrated and gone to the streets in protest for more protection, largely unnoticed by Europe and America.

"I accept this prize with gratitude also on behalf of all those who work for reconciliation between the different religious communities and those who work for a future without discrimination," said Obiora Ike on receiving the prize in Geneva.

In October 2002 Obiora Ike himself narrowly escaped an assassination attempt. In November 2012, one Sunday in the early hours of the morning, terrorists stormed the Catholic Church of St. Leo in Enugu, where Prelate Obiora Ike worked, destroying its inventory. He then encouraged the faithful to persevere steadfastly in faith and forgive the attackers.

The award is named after the deacon of the early Christian community, Stephen, who was the first martyr to be stoned for his confession of faith in Jesus Christ. Previous winners include Cardinal Joseph Zen from Hong Kong, who personally received the prize in April 2018 with great international acclaim, the Chaldean Catholic Patriarch Cardinal Louis Raphael I. Sako, the Vietnamese human rights activist and Christian lawyer Nguyen Van Dai and the Pakistani human rights lawyer Aneeqa Anthony. Two laureates died of martyrdom after the award: the first laureate, Ranjha Masih, a case of alleged blasphemy comparable to Asia Bibi, who died as a result of an act of revenge perpetrated on him by an extremist, and the Jesuit Father Frans van der Lugt from Homs in Syria, who was murdered by an Al-Nusra fighter on April 7, 2014. The Stephanus Foundation for persecuted Christians, for example, grants subsidies for education if victims are excluded from it due to discrimination, or pays contributions for lawyers' fees incurred in connection with persecution. It is involved in this regard in Egypt, Lebanon, Iraq and Asia and soon also in Africa.
A public ceremony, celebrating Prof. Ike's award, with a laudatory speech by the well-known Catholic publicist Martin Lohmann is expected to be held next year.