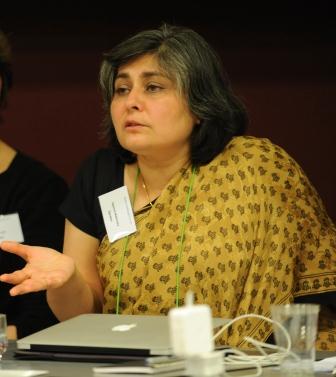 "We live in a world of contradictions, especially so in India where we have 1 million engineers but 16 million kids who are not in school; 70 per cent of our healthcare facilities are in cities while 70 per cent of our population lives in villages and small towns. Hence inequality as a theme of the conference is very relevant." Mr Shibulal, CEO and Co- Founder of Infosys and Co-Chair of the Global Ethics Forum, opening address, Global Ethics Forum 2014 Conference, Bangalore.

"At best, inequality is demotivating; at worst it is dangerously destabilizing. We need to focus on inclusive growth by leveling the playing field. We can achieve this with technology in the hands of all, good governance for sustainability, innovation and social entrepreneurship for prosperity, and public private partnerships." Ms. Kumud Srinivasan, President of Intel India

Equal in an unequal world - The Context

In the context of the five deepening global crises - economic, financial, environmental, political and leadership crises - the growing inequality related to gender, to wealth distribution and access to natural resources, jobs and education is becoming a major factor and a key challenge in the transition towards a sustainable social, economic and ecological model of development. The simultaneous surge in economic growth and inequality has led to serious implications for the BRIC countries like India and China, but also has revealed deep tensions and has posed risks for the Western societies in the so called developed industrialized world. One of the promises of  globalisation is that economic, political and social development could reduce many inequalities through access to resources, education, gender awareness, etc. But inequalities persist to exist and new forms have emerged that lead to social unrest, protest, revolutions, and to physical and mental diseases.

So what are the current and future dimensions of inequality on the national and global levels, and how are they interrelated with the various aspects of sustainable development? How can equality be improved? How much inequality is needed in competing markets? What is the role of business ethics and of corporate social responsibility (CSR) in this process? The Global Ethics Forum 2014 Conference addressed these questions and many others through a diverse framework of plenary and workshop sessions bringing together the voices of key leaders from India and worldwide. Together participants discussed the concepts, practical tools and solutions resulting from the Globethics.net workgroups and activities, and benefited from the potential of global networking.

Special attention was given to fair trade relations between China, India and Africa, with the presence of a Chinese delegation of entrepreneurs, academics and public officials in Bangalore. The Forum also discussed Globethics.net 'Principles of Equality' and a draft Declaration will be made available in an open consultation process from February 2014.

For the first time social media was mobilised to run the 'My Choice for Equality' campaign to recognise individuals who combat against diverse forms of inequality around the world. For more information go to our Facebook page and follow us on Twitter.

The Global Ethics Forum 2014 Conference was organised in cooperation with: