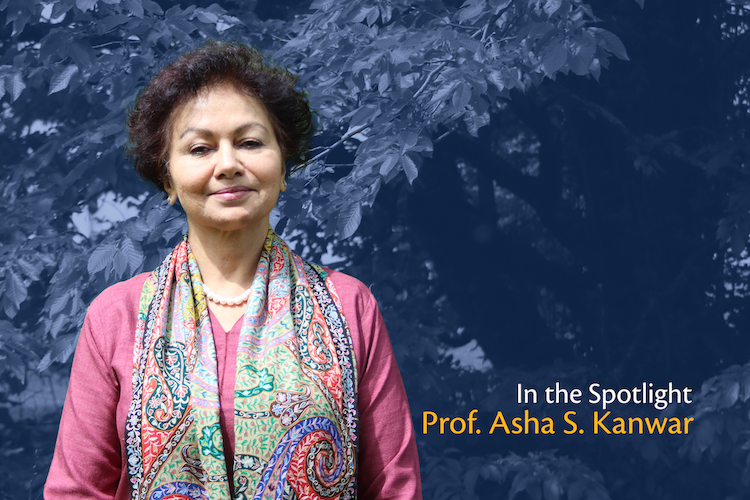 Strategically supporting the work carried out by Globethics.net is the organisation’s Board. Formed by members from all around the world, the Board is key in decision making and particularly in times of change, for example, in the election of our incoming Executive Director, who will take lead officially as of January 2023. So, it is only right that in the September edition of our In the Spotlight series, we interview a member of the Board: Prof. Asha Singh Kanwar.

One of the world’s leading advocates of learning for sustainable development, Prof. Asha Kanwar’s expertise and insight is immensely valuable to Globethics.net’s vision and mission of embedding ethics in higher education. Currently President and Chief Executive Officer of the Commonwealth of Learning (COL), throughout her career, Prof. Kanwar has made significant contributions in the areas of teaching, research, and international development and has received nine honorary doctorates from universities in Africa, Asia, Europe and North America. In this interview, she shares her motivations and what she feels makes Globethics.net unique.

Josie Hough (JH): Could you tell us a little more about your professional background and how it led you to Globethics.net?

Asha Kanwar (AK): I have been a professor at a university in a previous life and worked in international development for the past 20 years. The foundations of both sectors—education and development—rest on ethics and values. My organisation, the Commonwealth of Learning, was established by Commonwealth Heads of Government to promote human resource development in the 54 Member States, through the use of technologies. We are accountable to a diverse range of stakeholders across cultures, religions and belief systems—which means we must be highly ethical and transparent. As a Commonwealth organisation, we are committed to the Commonwealth Charter, which has 16 core values and principles such as good governance, democracy, rule of law, freedom of expression and human rights. So it was a natural convergence to Globethics.net which has a global membership and stakeholders with different religious beliefs and cultural traditions. Yet the common thread that promotes unity in this diversity is ethics and shared values.

JH: What has your experience been as a Globethics.net Board Member?

AK: I value my time as a Board member because of the wisdom, warmth, and friendship of my fellow board members and the executive. Being in the company of like-minded, passionate, and committed people who want to make a difference is both a privilege and a pleasure. The meetings are well-planned with rigorous and robust discussions where everyone has the opportunity to present their perspectives. As members, we may not always agree but a consensus is reached amidst harmonious collegiality. I am proud to be part of a board where each member understands the organization and its work and trusts the executive to do their job. I enjoy my time on the board and admire the people I work with.

JH: What would you say has been your most memorable or impactful activity with Globethics.net?

AK: COVID 19 created a hiatus in the number of in-person meetings that would have been possible in normal times. So, when we got together for an in-person meeting in Geneva, it was both special and memorable. I had the opportunity to visit the headquarters, the beautiful chapel in the building, and witness the multicultural environment in which Globethics.net works. We discussed the next Strategic Plan at this meeting, which has implications for the future of the organisation. What I also find most special at Globethics.net meetings is that they always begin with a reflection by one of the members—these reflections are both thought-provoking and moving!

JH: What motivates you in your role?

AK: I’m on several international boards—this is one of the boards where there is perfect alignment between board and management. Starting from this position of respect and trust, the board can play a much more important role in not just providing oversight but also strategic direction. Contributing to the governance of a thriving, ethical, and well-run organisation, playing such an important role globally, is a major motivation.

JH: Is there anything that stands out for you as a specific feature regarding the organisational culture of Globethics.net?

AK: The organisational culture is that of compassion, understanding and respect for diversity. The small team is very cohesive and works together so well. The credit for this would have to go to the leadership which is both wise and visionary.

JH: Why does ethics in higher education matter, and why does it matter to you personally?

AK: One country that has a high number of PhDs also has the highest number of rapes in the region. Corruption, exploitation, and unrest continue to be rampant across the world. The climate crisis is upon us and we simply look on. Is this a failure of higher education? Ethics must be at the very heart of the higher education enterprise, where every person needs to adopt responsible behaviours and ethical actions. We need citizens who contribute to both national development and peace and prosperity on the planet. This is the need of the hour and the call of the future.

JH: Thank you Asha for taking the time to share with us and for summarising so concisely and eloquently why we do what we do here at Globethics.net.