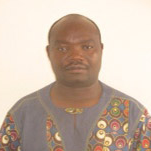 Professor Kitoka Moke Mutondo, 45, was awarded his doctorate in  politics ethics in 2010. He teaches ethics in universities and higher education institutions in the Eastern regions of DR Congo (South-Kivu, North-Kivu and Maniema). He also leads the Centre Interdisciplinaire des Recherches en Ethique, which he created within the Evangelical University of Africa (CIRE- UEA in Bukavu, South-Kivu).

In 2012, he published his thesis in French on ‘Church, Human Rights protection and State Refoundation in DR Congo' (‘Eglise, Protection des droits humains et refondation de l'Etat en RD Congo'). He shares: "I wanted to involve all religions in the democratic and legal cultural development for a sustainable peace in DR Congo". It took him two years of research and one year to write the thesis. He heard about Globethics.net during this editing phase at the University of Lausanne in Switzerland.

In 2013, in the volume on ‘The rise of Islam in South-Kivu' (‘La montée de l'Islam au Sud-Kivu') that he co-wrote with Bosco Muchukiwa, Kitoka Moke Mutondo looked at how to prevent conflicts between Muslims and Christians in South-Kivu by implementing ethics committees in charge of defining inter-religious frameworks to ensure peace.

The impact of his books is significant. As he says "Several politicians liked my books and asked me to train their members. Sweden, via the relief and development organisation Pingstmissionens U-landshjälp, financed two projects on ethics and governance training. We also coach ethics consultants and speak often on ethics for civil societies organisations".

Professor Kitoka Moke Mutondo recognises that being published gave him self-confidence and increased his will to share information. He encourages local authors to publish their books via Globethics.net.