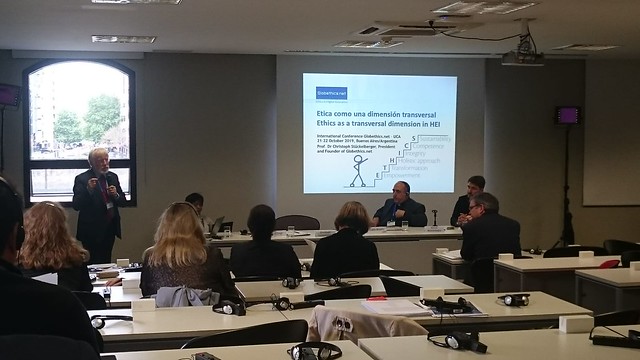 Globethics.net and the Catholic University of Argentina (la Universidad Católica Argentina, UCA) organised the First International Conference on 'Ethics as a transversal dimension in higher education: Challenges for Latin America' at UCA in Buenos Aires, Argentina from 21- 22 October 2019.
Latino America covers more than 13% of the Earth's land surface area and has a population of more than 642 million people. According to the Transparency International Perception of Corruption Index (PCI), the ratings of a number of Latin American countries in 2018 have declined. There is particular concern about levels of corruption in the political and economic spheres (https://fas.org/sgp/crs/row/R45733.pdf). The Conference took place as Argentinians were set to go to the polls for a national election on 27 October with the middle-class shrinking due to evaluation and better governance and values-driven leaders in demand.
It was against this background that Globethics.net and the UCA organised the two-day Conference on ethics as a transversal dimension in higher education and society, with speakers from government, civil society and academia to address the needs of society and the desire for change.
Experts from all the continent and especially from Latino America gathered together to discuss the vital role of ethics in education. As Fr Ruben Revello, Rector from the UCA expressed in his welcoming speech, 'students imitate the examples that are set'. Therefore integrating ethics in higher education is essential to building values-based universities and institutions that can educate new generations to empower them to overcome corruption and vice.
The first day was open to the public and focused on the interdisciplinarity of ethics and its role in different sectors of society, such as governance, the economy, education and technology. The conference was organised around discussion panels with a moderator accompanied by well-known experts on each area for each group.
The conference started with a panel on ethics and governance, a particularly sensitive topic in Argentina at that time since elections were running that same weekend, 27 November 2019. It showcased the need for value-based leaders.
Participants were invited to take part in an interactive session on the perception of values and obligations organised by Carlos Rozen, Programme Director of the Certification of Ethics and Compliance of the University of the CEMA and the Argentinian Association of Ethics and Compliance. The assessment showed that the majority eat more and exercise less than they need and that they lie from time to time.
Dr Pavan Duggal, Globethics.net Board Member, brought up the right to be forgotten on the Internet. The importance of ethics evolving in the process of regulating the Internet, highlighting the work Globethics.net on this field with its last book on Cyber Ethics 4.0: Serving Humanity with Values.
The programme on the second day led to a more in-depth conversation on ethics in education. Globethics.net President, Christoph Stückelberger and colleagues from the Latin America Regional Office (Deivit Montealegre) and from Head Office (Academic Dean, Amélé Ekue) had the opportunity to listen to the challenges that universities and institutions are facing in their attempt to build values-based learning environments. They shared information on how Globethics.net integrates ethics in the different topics discussed during the two-day conference through its resources.
Obiora Ike, Globethics.net Executive Director defined this first International Conference in Latin America as a nurturing experience. It allowed Globethics.net not only to build new contacts and partnerships but to know better the Latin American strengths, the moment that it's living in with a society demanding more ethical leadership, and with an eagerness to make a change.
This event also gave the opportunity to introduce Maria Eugenia Barroso as the new Programme Executive for Globethics.net South America and to thank Deivit Montealegre for all his years of magnificent work and dedication to Globethics.net South America and globally. Although he is leaving the Globethics.net South America office he will continue to be part of Globethics.net as a Senior Associate.