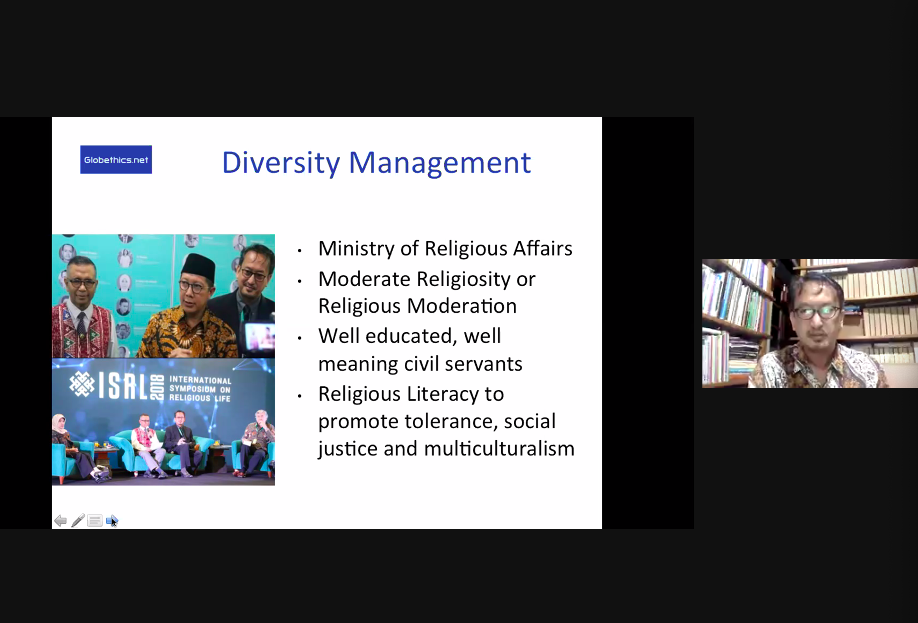 Diversity as a source for inspiration for continuous learning

The second Blue Table Webinar focused on Ethics and Diversity, brining together over 90 participants from all around the world. The opening reflection of Globethics.net Academic Dean, Amélé Ekué invited the concept of diversity as a source for inspiration for continuous learning, rather than exclusion. She emphasised the need to place values at the centre in order to address differences in a constructive manner, so that people may live together in complex situations. She concluded her opening with a vote of thanks to the speakers, as well as some food for thought with a quote from the late Kofi Annan, ‘we may have different religions, different languages, different colours of skin, but we all belong to one human race'.

Prof. Dr Dicky Sofjan, Indonesian Consortium for Religious Studies introduced the rich diversity present in Indonesia. The country is compromised of 17'000 islands, which translates to rich social, cultural and ethnic diversity. Whilst the religious demography is predominately Islam  (sunni islam & syafii juridical school), he also noted the presence of 400 local religions, as well as indigenous and spiritual beliefs. He introduced the concept of ‘diversity management', in which the Ministry of Religious Affairs aimed to promote moderate forms of religiosity, focusing on religious literacy to promote tolerance, social justice and multiculturalism. He further more explained the parallels that exist within different religions, and highlighted how some of the Islam values are compatible with democratic practice. He also introduced the concept of  ‘knowledge brokering', which essentially refers to exchange between academics and intellectuals, and their role in facilitating and mediating knowledge exchange to avoid misunderstandings. He explained how this may be used a strategy to link scientific and strategic knowledge. A concrete way to do so would be through the promotion of action research, which would have greater ethical implications for society. When questions during the Q&A on this concrete plans for implementing social justice, he responded by saying that ‘the administration of social justice is much more important than how we define it. It is a matter of principle, that all are equal and should be treated as such without discrimination'.

‘The value of personal transformation to overcome structural challenges'

Our second panellist, Rev. Dr Angelique Walker-Smith, Bread for the World, USA focused on diversity, equity and inclusion within the American context, and defined diversity, equity and inclusion as ‘programs or policies that encourage representation and participation of diverse groups of people'. She noted how this term had evolved as an expansion from what was originally referred to as ‘diversity and inclusion'.  From a theological perspective, she noted how this concept was rooted in scripture, and viewed it as a secular approximation of Rev Dr Martin Luther King's ‘beloved community'. She also emphasised the need to place more value on personal transformation, which in turn would aid in overcoming the structural challenges placed before us.  She emphasised that personal transformation can lead to social transformation, and noted the role of religious communities and their use of more personal and individualistic approaches regarding values. She concluded her talk by expressing that ‘there must be room to rewrite conventional narratives, for a broader inclusion of global perspectives and multi-narratives'.

Make sure to join us for our next Blue Table Webinar on Ethics and Democracy! 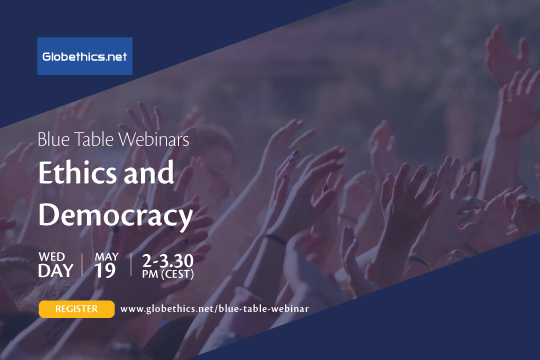