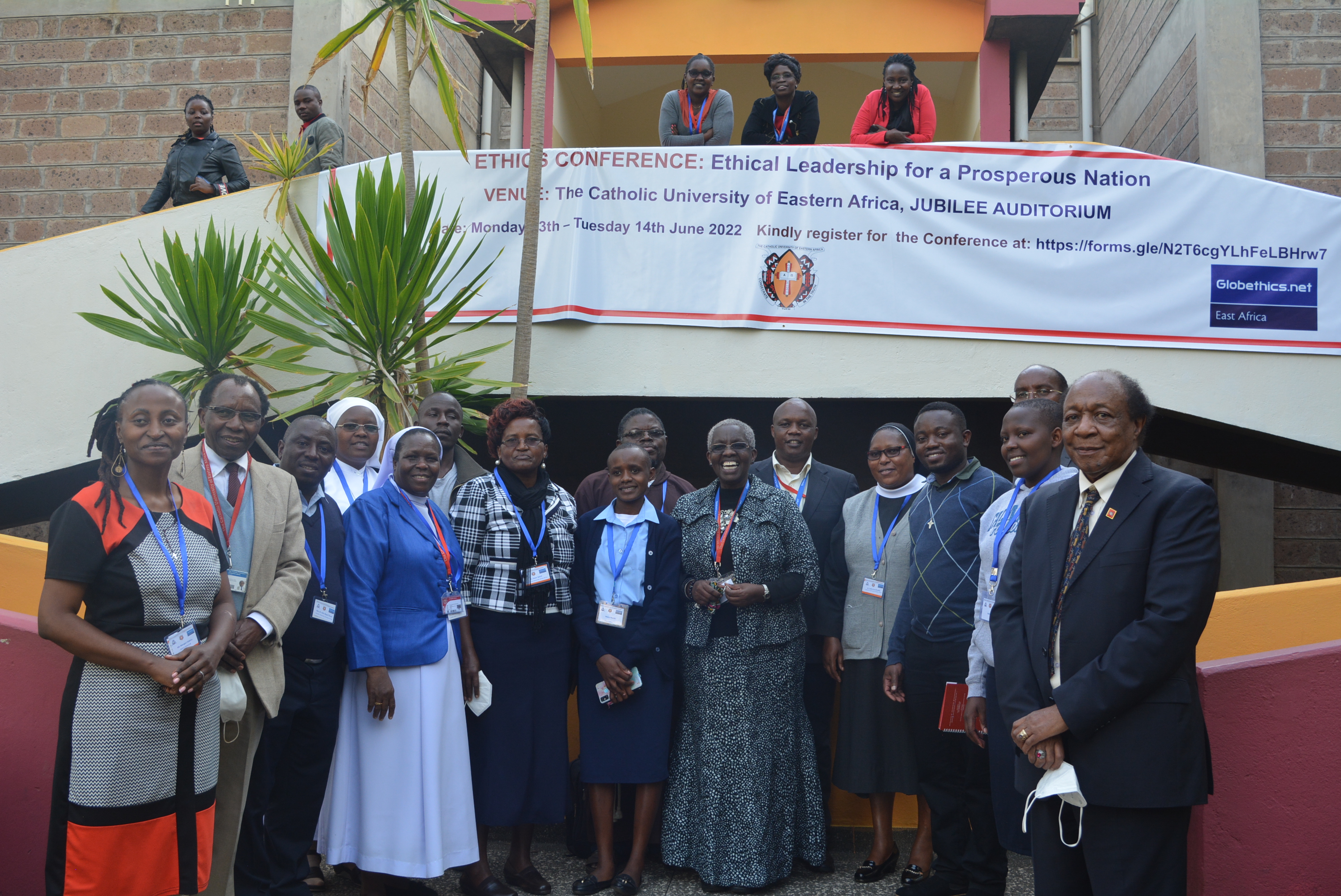 Globethics.net East Africa (GE-EA), the Catholic University of Eastern Africa (CUEA), and the Presbyterian University of East Africa (PUEA) organised a blended conference held on the 13th and 14th June 2022 in the Jubilee Hall Auditorium at CUEA, Nairobi, Kenya, and also online through Zoom. The theme of the conference was Ethical Leadership for a Prosperous Nation. It attracted participation from various sectors including academia, faculty members and students in higher education institutions; church leaders; legal and civil society professionals. The presentations covered the areas of good governance, peaceful elections, ethics in electoral processes, servant leadership, women and leadership, leadership and human dignity, care for the environment, youth and leadership, corruption, respect for the rule of law and the principles of solidarity and subsidiarity.

In the official opening of the conference, the Vice Chancellor of the Catholic University of Eastern Africa, Very Rev. Prof. Stephen Mbugua Ngari said that “Ethical leadership is an important theme in discussing the dynamics of leadership.” He went on to say that it is only ethical leadership that deals with the real issues of justice, respect for the law, respect for what is right, as well as subscribing and adhering to or executing the principles that respect fairness, equity and moral application of situational conditions of leadership. He argued that if ethical behaviour persists in leadership, then welfare and equal opportunity for all is included and this leads to a prosperous nation. The Vice Chancellor also pointed out and expounded on the following qualities of a good leader that align well with ethical leadership. They are vision and foresight, intelligence, listening and communicative skills, objectivity and a sense of responsibility.

The keynote speaker during this two-day conference was Rt. Rev. Bishop Joseph Obanyi of the Catholic Diocese of Kakamega in Kenya. He began his speech by noting that this conference was taking place at a time when Kenya is heading to the general elections, “a time when the country is subjected to high tensions and politics of competition. Aspirants are spending money and energy to convince the electorate that they are the right leaders, many are even portraying the ‘messiah syndrome’, and the coming elections are perceived to be the long-awaited solution.” He went on to point out that elections come and go, while the situation of the people hardly changes. As a matter of fact, these coming elections are likely to be yet another cycle of the same circus. The bishop also noted that there is a crisis of leadership. He said:

The kind of aspirants vying for different positions are not necessarily people of integrity, or with any known belief, except what suits their egos. They lack conviction, they would be ready to sell their birthright for a bowl of soup. For them, patriotism is all about their interests. It is never about people and the common good.

The bishop went on to say that the Catholic bishops of Kenya have for a long time now raised issues of governance, leadership, elections, justice and peace, at both individual and conference levels. He said that it is the task of the Church to inform citizens of their civic responsibilities and to assist them during the electoral process. That is why the Church is fully involved in the electoral process of Kenya at the threshold of the general elections and beyond. He challenged that for truly effective leadership after the elections, a much-needed formation of conscience is the conversation that Kenyans must be called upon to engage in.

The Globethics.net Executive Director, Msgr. Prof. Obiora Ike was also present at the conference, following the proceedings via Zoom. He passed his greetings from Geneva to the participants present both online and onsite. He also pointed out the importance of ethical leadership in steering the prosperity of nations. He highlighted that the theme of the conference was in line with the strategic vision of Globethics.net, which is embedding ethics in higher education. As such striving for a world in which people, and especially leaders, are educated in, informed by and act according to ethical values and thus contribute to building sustainable, just and peaceful societies. He also informed the participants that CUEA had been considered by Globethics.net to be a Centre of Excellence in the region following discussions with the university's Vice Chancellor in February 2022. He concluded by wishing the participants fruitful engagements during the two-day conference.

On 7th and 8th July 2022, Globethics.net East Africa, in collaboration with the Catholic University of Eastern Africa and St. Paul’s University, will be leading the third and final conference of a three-part series on Towards Sustainable Knowledge and Ethical Societies: The Contribution of Higher Education Institutions.

This third conference on the theme “Promoting Ethical Societies through Higher Education” will be an online event on both days starting from 13:00-16:00 CEST, which is 14:00-17:00 East Africa Time (EAT).

You are all invited to take part in the conversation on promoting ethical societies. Kindly take two minutes of your time to register for this event at https://form.jotform.com/220961969930366. We look forward to welcoming you to the conference.