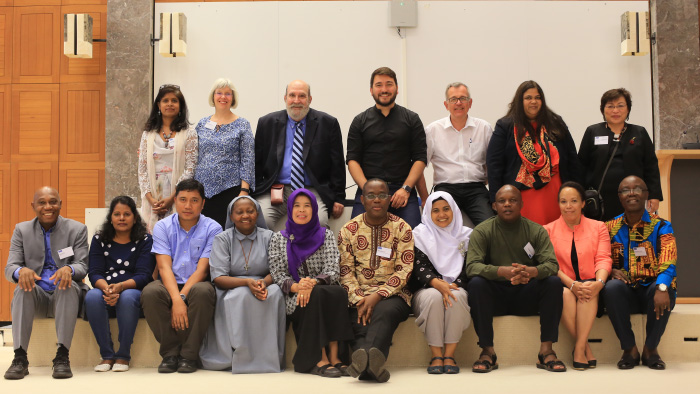 (Picture of the Regional Programmes, National Contacts and some Globethics.net staff members- taken on 30 August 2019) 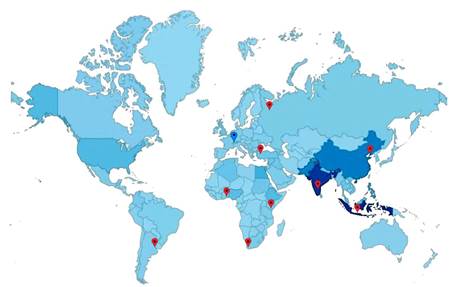 Globethics.net is a global network that exists in regional contexts. Regional programmes have been established since 2009 to further enrich global outreach by opening up offices with local contacts and resources and to create a balance between global and contextual ethics. The regional programmes identify and include ethics resources from their regions in the global library, attract new participants, translate website content and documents, engage in regional research programmes and moderate local workgroups.

(The darker the blue is the more visits on Globethics.net website)

Since the beginning of 2010 the Centre for International Business Ethics has taken over the Coordination of Globethics.net in China.

Globethics.net India was formally established on 10 September 2010, during the Founding Meeting held at Dharmaram College, Bangalore.

Since the beginning of 2010 the Indonesian Consortium for Religious Studies ICRS Yogyakarta has taken over the regional coordination of Globethics.net Indonesia.

The Globethics.net East Africa Programme started in March 2011. The host insitution is the Center for Social Justice and Ethics (CSJE) of the Catholic University of Eastern Africa in Nairobi.

Globethics.net has opened a regional programme in Francophone Africa in August 2012. The host and partner institution is dynamique OSCAF, a network of non-governmental organisations in almost 20 francophone countries in Africa with its head office in Cotonou (Benin).

The Globethics.net Russia regional programme opened in 2013 and is hosted by the Institute for Economic Strategies in Moscow/Russia. The Institute (founded in 1990) is a scientific and consulting organisation functioning under the auspices of the Social Sciences Division of the Russian Academy of Sciences.

In April 2014, Globethics.net launched its programme in South America. Deivit Montealgre was then appointed as Programme Executive and worked in developing the South American network as well as the library after having worked with Globethics.net as a library submitter and reviewer since 2012. The cooperation agreement between the Latin American Faculty of Social Sciences (FLACSO), represented by Dr Florencia Luna, and Globethics.net, represented by Dr Christoph Stückelberger, was signed in August 2014. Dr Florencia Luna is currently director of the Ethics, Rights and Global Public Goods programme at FLASCO in Buenos Aires, Argentina.

The University of South Africa UNISA, is the new partner and host of the Globethics.net Southern Africa Regional Programme. UNISA is the largest open distance learning institution in Africa and the oldest dedicated distance education university in the world. UNISA currently has over 420,000 students enrolled in its courses, nearly one third of all South African students.

The host institution for Globethics.net Turkey is the Ethics and Reputation Society TEID, founded in May 2010 as a non-profit organisation that aims to develop and encourage  adherence  to universally recognised business ethics principles and to disseminate them in the Turkish business environment.

Globethics.net has regional programmes in China, India, Indonesia, Eastern Africa, Francophone Africa and in Russia. Globethics.net has over 30 National Contacts in five continents as in many countries, thousands of participants are registered and regularly ask for more contact within the country. Registered participants of Globethics.net can also offer to become National Contacts to promote and coordinate Globethics.net in a country. Globethics.net looks for dynamic persons for this task of promotion and coordination of Globethics.net in a country. Required are persons who have a good reputation, can offer 10-20% time for free and are linked to an institution in order to enable some stability for this task. The position gives the persons a national and international outreach and possibilities of additional networking on ethics.
More information in this document.
Application form