Register now for free!
Ethics in Higher Education
« Back

Putting females at the forefront of organizations is vital for promoting values in them says Musimbi Kanyoro, a Kenyan who works internationally for women. Dr Kanyoro is President and CEO of the U.S.-based Global Fund for Women and was the keynote speaker on the opening day of the 2015 Global Ethics Forum. 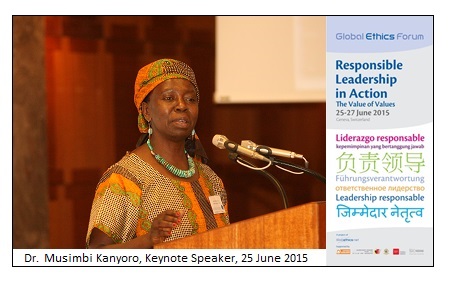 The sixth Global Ethics Forum is hosted at the Ecumenical Centre in Geneva from 25-27 June under the theme "Responsible Leadership in Action: The Value of Values". Participants and speakers come from many regions and countries of the world, such as east, north, southern and West Africa, China, India, Indonesia, Russia, Switzerland and other European countries.

"In areas of philanthropy we look at the leadership on problems that cannot be solved by one person," said Kanyoro, who was general secretary for the Geneva-based world YWCA from 1997 to 2007. Whether it is dealing with the effects of climate change, violence against individuals or women, or migration, each area "needs different kinds of leadership" and "we can only solve problems when we care".

Kanyoro asserted academic institutions need to have "policies and laws" for women "that we can rally around" in later comments at a panel discussion on Developing Systems and Strengthening People for Responsible Leadership at the Graduate Institute.

Kanyoro said the leadership process requires dexterity: "Life is not about waiting for the storms to pass…it's about learning how to dance in the rain." Leaders need empathy to the people they serve and the ability to bring other with them.

"Responsible leadership requires acknowledging that our values systems serve as a compass for our actions, and that our actions affect the world around us," said Kanyoro who hold a Ph.D in linguistics from the University of Texas.

She asserted that leveraging the resources of others, sharing by default and celebrating the work of others, flexibility and firmness are all needed in responsible leadership.

Another important attribute is "having to accept that failing is part of a good practice and sometimes people need to fail first in order to succeed," said Dr Kanyoro. A fear from people that they will not get resources can lead them to exaggerate results, so it encourages honesty when people who fail "can be able to turn in a different direction".

Another important aspect of leadership is "knowing when to go" for everyone joins a job knowing they will leave one day. "Have your exit strategies," she said and "don't hire a new person before you think about the future of an organisation".

The Global Forum 2015 Conference brings together people and projects that concern themselves with responsible leadership. The sponsors and partners of the 2015 Conference, include: the Loterie Romande, the City of Geneva, the Sri Ramanuja Mission Trust, the Graduate Institute in Geneva and Nestlé.